Long on Superb Song and Dance; Short on Drama 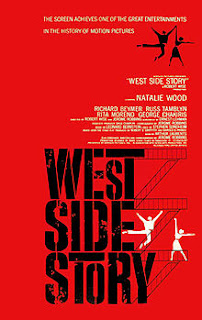 West Side Story originated in a Broadway Musical of the same name which did well, but it was the movie that propelled it into a second run and much greater notoriety. The film garnered 11 Academy award nominations, winning 10 of them. However, it's very important to note among all those nominations, Best Actor and Best Actress were glaringly not among them (the singing for both was dubbed). It hasn't withstood the test of time as well as some other highly acclaimed film musicals from the 1960's. The plot is shamelessly based on Shakespeare's Romeo and Juliet, reset into mid-1950's era New York City tenement gangs (Jets and Sharks), the manner of which hasn't helped its aging.

What attracted so much attention from the academy? Put it into context in 1961. West Side Story was a huge break in the musical genre from the typical meringue and whipped cream musicals of the 1940's and 1950's, some of which were thinly veiled showcases for ballroom dance pairs like Ginger Rogers and Fred Astaire, or a spectacular musical revue, and others of which featured very traditional song and dance. It contained syncopated rhythms and modern dance routines with a superb musical score by Leonard Bernstein. The style of the song and dance routines is completely different. Unfortunately, what could have been a more powerful movie was overwhelmed by the dance director, Jerome Robbins, not knowing when to call "cut" and let the movie move on. We end up with a film filled mostly by song and long dance routines at the expense of a potentially compelling dramatic story. The result is the drama being a vehicle shell to carry a song and dance spectacle instead of the singing and dancing being used to carry and punctuate the drama. Contrast it with the 1965 Best Picture, The Sound of Music (even though its Rodgers and Hammerstein music is much less edgier), 1972 Best Picture nominee Cabaret, 1979 Best Picture nominee All That Jazz, or with the 2002 Best Picture, Chicago. All these have more substance to their drama with song/dance that supports it instead of displacing it.

Impressively different music and dance when theatrically released in 1961, its song and dance are exceptional. However, the story's drama is stunted by it dominating the film, and it has suffered from that over the years as the edge to its music and dance has worn off.

MPAA Rating Note:
West Side Story was produced prior to the MPAA's rating tiers. Films were either "approved" and issued a certificate number or they weren't using the restrictive Hays Code that was strictly enforced in 1961. It was a "one size fits all" system, and theaters other than some "art houses" that specialized in foreign and small independent films would not exhibit movies that were not approved (with some very rare exceptions), nor would many newspapers carry advertising for films that were not MPAA "approved."
- November 22, 2019