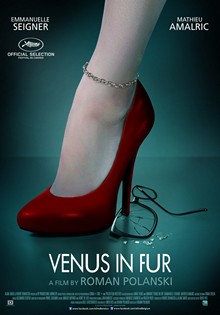 The compelling power of this film is in the interaction between a stage director and an actress that shows up quite late to audition for the lead role in his play, a stage adaptation he has written of Austrian Leopold von Sacher-Masoch's 1870 "Venus in Furs" novella. It was adapted from the 2010 two-person stage play of the same name by David Ives.


For those not savvy to the etymology of "masochism," von Sacher-Masoch is its namesake, primarily from some of his writings of which this novella is the most famous. It was coined in 1886 by Austrian psychiatrist Richard Freiherr von Krafft-Ebing. Leopold was not pleased by this.


The uniqueness of this film is two actors on a single set, a traditional proscenium theater, containing a handful of props on the stage. The actress Vanda (Polanski's wife Emmanuelle Seigner) convinces the stage director Thomas (French actor Mathieu Amalric) to read the script with her and grant an audition in spite of being late past the time when he had planned to leave for the day. Their role playing gradually devolves from a very well-played switching between being "in character" to actress and director as the reading progresses until it begins to blur. She has an uncanny knowledge of the play and brought with her some costuming and personal props for the role. The unpredictability of this and where it will ultimately lead is captivating as the tension between them builds to a final and an unexpected twist at the end. It's one that has enough ambiguity about the two characters' personalities, emotions and motives that it begs multiple viewings of the entire movie. I've no doubt Polanski did this deliberately to leave interpretation of it to the audience.

The power of this film is not in the minimalist costuming, set or its props, and there are no special effects. It's all in the dialog, the dialog delivery, and the body language of the actors, who carry it exceptionally well. Combined with Polanski's direction, the tension ratchets up at a relentless steady pace to the very end. Venus in Furs is not Polanski's "best" film but it is most certainly near the top of  his better ones, well deserving of the awards and award nominations it has received.

Current Blu-ray Release Notes:
This movie has not been released on Blu-ray in North America. I have the locked Region B (Europe) U.K. Blu-ray release locked to Region B (Europe) with French dialog (only) and English subtitles. Not a problem for me as I have an "all-region" Blu-ray player. It is a problem for nearly all retail Blu-ray players sold in North America that are locked to Region A. There is a Region A Hong Kong Blu-ray release with French dialog (only) and English subtitles that will play in North American Region A Blu-ray players. The Blu-ray transfer is quite good. The dialogue is French (only; no dubbed sound tracks) with subtitles. Those not fluent in French will need to pay attention as both dialogue and actor body language are quite important. This demands more than casual viewing. I found the subtitles to be a good translation as I do understand some basic French and it captures the mood well (i.e. it's not a purely literal one that would lose mood, emotion and feeling).

MPAA "Unrated" Note:
This movie was produced in France. Like most foreign produced, foreign language films it has never been submitted to the MPAA for a rating and I doubt it ever will be as it costs money to have one rated, and the fee isn't chump change. I would give it a definite a very hard "R" rating, but not from some of the occasional cursing, nor from any graphic sexual content as there is no exposed nudity. It's the pervasive masochism subject material in an erotically charged dialogue with matching body language and the actors' synergy. That makes this quite decidedly an "adult" movie.
- November 22, 2019