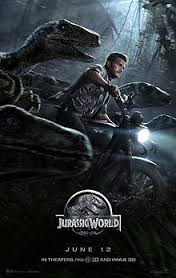 The Jurassic Park franchise joins the ranks of the Paranormal Activity, Final Destination and Saw franchises in completely wearing out its formulaic plot until it's threadbare. The original directed by Spielberg with its story adapted from the Crichton novel was a creative achievement. Number four is neither creative nor original. It does nothing whatsoever to advance the original premise or further the story.  Pull out the original script, list its major plot points, characters and plot devices used, put new window dressing on it for a screenplay, crank it out in time for a Summer release, and wow audiences with a spectacular display of current technology visual and sound special effects. The strategy is maintaining sensory overload with the action and special effects at a continuous breakneck pace so the audience doesn't have any respite to realize there's absolutely nothing original in the plot. I'm dismayed Spielberg is one of the executive producers. I would have washed my hands of it until there was something creatively  original to further the Jurassic Park franchise story line.

The first two sequels were weak compared to the Spielberg original, and now there's a third Jurassic Park sequel that contains nothing new. They've been completely formulaic including this one: Dinosaurs on the loose dramatically munching up the people left and right who deserve a gruesome end for one karmic reason or another, all because a clueless moron ignores all the likely consequences for personal scientific glory or greed and does something incredibly stupid that eventually turns them loose. Let's not forget about the kids who need to be rescued, an estranged couple that need to be reconciled with each other, and an ending that has an obvious setting for yet another Jurassic Park movie. Compare the Jurassic Park franchise to Sam Raimi's Spiderman trilogy, or Christopher Nolan's Batman trilogy, or the Iron-Man trilogy, or George Lucas' Star Wars franchise, or even the live action series of Resident Evil movies. All of those franchises have sequels that build on the original movie with with original, creative story and principal character development. Just like its behemoth dinosaurs with pea-size brains, Jurassic World has magnificently impressive special effects and ADHD non-stop action on a gargantuan scale, with pea-size originality.

Rent the first Jurassic Park directed by Spielberg, or buy it used, and watch it instead (I recommend it over the first two sequels). Afterward you won't need to see this one. You'll have already seen it. I'm extremely disappointed with Jurassic World, the Jurassic Park franchise, and with Steven Spielberg as its producer. All three sequels have been great opportunity badly squandered. One star because at least it's got a little more character development than the latest Mad Max movie.
- November 22, 2019