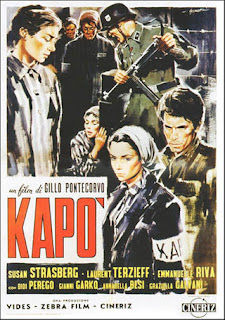 Gillo Pontecorvo, one of Italy's best directors, made so very few films. The consensus is he was so fearful of not being able to do a film exactly right that it paralyzed his ability to start moving toward the production of one. Thus a half-dozen years separate this film from his next one, his seminal "The Battle of Algiers." We see a similar style, though, with his use of B&amp;W in nearly a newsreel or documentary style of cinematography to convey the story visually. Both this and The Battle of Algiers received well deserved nominations for Academy Best Foreign Language Film Oscars.

The following review contains some spoilers . . .

A young Susan Strasberg, who had played Anne Frank in the Broadway stage Diary of Anne Frank production (but not in the film), plays the leading role of a 14 year old French Jewish girl living in Paris. On the way home from a piano lesson she witnesses her parents being rounded up for deportation to a concentration camp. In spite of her parents' pleadings to run away and hide, she runs toward them and is forced onto the truck. At the concentration camp, the children are separated from their parents and the adults are divided into groups. A young boy tells her they (the children) are all going to be killed the next day as he overheard SS guards discussing it. She seizes an opportunity to escape the shed and tries to find her parents. Instead, she's taken in by a non-Jewish criminal prisoner who turns her over to a prisoner doctor that gives her the identity of a deceased criminal prisoner (clothing and tattoo). Jewish internees wore yellow stars of David; non-Jewish wore inverted triangles with the color indicating criminal or political. The next morning she witnesses the naked children she had escaped from and her naked parents (with other adults) being herded off to their death in the gas chambers.

With a new identity as Nicole, a non-Jewish criminal prisoner, she stands a much better chance of survival compared to the Jewish and most of the political prisoners. The desire for survival results in her providing sexual services for the camp guards, and eventually becoming a Kapo, a prisoner-guard. The SS that operated the camps were insidious, using prisoners as prisoner supervisors and first line guards with billy-clubs, rewarding them with better food, better clothing and not having to perform hard labor. They favored using the criminal prisoners as Kapos. Some of them became notoriously brutal and aided in selections of those who would be exterminated. In this respect, Pontecorvo portrays the role of the Kapo with some accuracy, albeit omitting some of the severe brutality some Kapos inflicted.

As the war progresses, a group of Soviet Red Army POWs is interred in another section of the same camp. A clandestine relationship develops between Nicole (Strasberg) and one of the Soviet POWs. Ultimately, she is confronted with what she has become. This is the collision of her underlying values and morals with a fiercely strong desire and will to survive that finally comes to a head when it is clear the SS will not evacuate the camp to another further west, but liquidate all its prisoners there before they can be liberated by the advancing Soviet Army.

The result is a film that examines the conflict between the will to survive with moral and ethical values, through the eyes of a 14-16 year old girl (the film spans 2 years of internment). It's easy to lose sight of her age as the film progresses although there's a couple small reminders late in the movie. The one aspect that seemed contrived was the nature of the clandestine relationship she formed with the Soviet POW and how it was maintained. Unlike the rest of the plot that depicted the brutality of the concentration camps (with obvious restraint) this aspect of it wasn't entirely credible, but I also don't see how to get to the film's climax at the end without it. The ultimate questions this movie should raise in the viewer are what limits there are, or should be, on compromising values, ethics and morals in order to survive in that environment. It's most definitely not a "happy ending" film, but exposes the despair, nihilism and desperation one would expect to find in concentration camp internees.

MPAA Rating Note:
Like most foreign films, this one has never been submitted to the MPAA, and therefore holds an "Unrated" status. There is considerable restraint in not showing some things graphically on camera, but Pontecorvo leaves no doubt about what has happened out of camera view. I believe he did this judiciously to keep it from being heavily censored for violence content. Remember this movie was released in 1960 with many countries exerting much stricter control over content (including the MPAA in the USA) than is found today. In spite of this restraint I would give it a very hard PG-13 due to its depiction of WWII concentration camp brutality and would certainly use judgement about letting anyone under 15 view it, the minimum age a number of European countries have issued for it.
- November 22, 2019