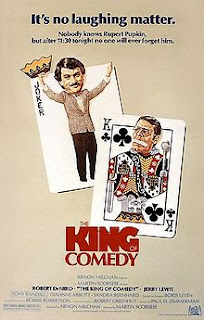 If you're expecting the typical Jerry Lewis slapstick comedy, you won't find any of it in this film. Aside from a few lines of talk show host monologue he plays a completely straight non-comedic role and does an excellent job of it. It's blatantly obvious his character, Jerry Langdon, is portraying Johnny Carson and The Tonight Show. For those too young to remember, Johnny Carson, who hosted the show for 30 years, was Jay Leno's predecessor, who was Jimmy Fallon's predecessor (not counting the brief Conan O'Brien debacle).

Robert Pupkin (Robert De Niro) is a stage door autograph hound who is obsessed with becoming a stand-up comedian. He has enormous ambition, but unfortunately zero talent, and even worse, he's utterly oblivious to his lack of talent. Jerry Langford (Jerry Lewis), is a world famous comedian and late night talk show host, whose stage door Pupkin frequently hovers around for autographs. He has a brief "chance" meeting with Langford by interdicting Masha (Sandra Bernhardt), a woman stalker romantically obsessed with Langford who is preventing him from getting into his limo. Pupkin deludes himself into believing from this that has found his "Big Break" as Langford now knows him. An audio tape of his "act" is rejected by Langford's staff and he is repeatedly rebuffed by them at their offices, until Langford does so himself. Pupkin is escorted out of the building by security officers as persona non grata and told never to return. Eventually he conspires with the obsessed stalker Masha in a plot to force his way onto Landon's show as the lead-in act. Nothing goes as planned, but nothing shakes Pupkin's grandiose delusions either. What they do and how it all ends would be too much of a spoiler.

Jerry Lewis should have received more recognition for his excellent performance. Sandra Bernhardt (Masha) is nearly over the top with her portrayal of a manic obsessive. In my opinion it's deliberate to provide sufficient contrast with Pupkin's delusional obsession. Robert De Niro is completely immersed in his Pupkin role and plays it with his usual mastery throughout. The magnitude of his role compared to the rest of the cast dominates the story, its dialog and its limited action. De Niro's skill as an actor playing the inept, pathetic Pupkin clearly shows and he carries the film.

The very dark comedy and its style is atypical of Scorsese. It's a significant departure from three previous film collaborations with De Niro: Mean Streets, Taxi Driver and Raging Bull. (New York, New York with De Niro and Liza Minnelli is another substantially different departure in a musical.) I found De Niro's character, Rupert Pupkin, painfully embarrassing to watch at times. I wanted to feel some sympathy for his pathetic bumbling life filled with delusions, but it's impossible as he's also an obsessively obnoxious jerk oblivious to how he's continuously humiliating himself without any respite for the entire film. I was left at the end feeling this was deliberate on the part of Scorsese, that he didn't want Pupkin to have anyone's sympathy. The discomfort I felt regarding Pupkin during the first 2/3rds of the film eventually gave way to the absurdity of his self-destructive actions. If "Greatness" wasn't possible he was determined to go down in a blaze of "Glory," which he does quite dramatically. Even then, at the very bitter end, he still cannot give up his lesser obsession with the barmaid he thinks is his girlfriend (a high school acquaintance) and his delusions of grandeur.

Overall an excellent job by Scorsese with excellent performances from Lewis, De Niro, Bernhardt, Diahnne Abbott (plays a barmaid, Rita Keane, who Pupkin thinks is his girlfriend; another delusion) and the other principal supporting actors and actresses. Don't expect the norm though for Scorsese, Lewis or De Niro.

Cinematography Note:
The scenes showing Langon's broadcast TV program are quite soft. This was intentional in the original filming. Scorsese deliberately filmed those scenes using the low fidelity videotaping systems used for studio recording TV programs to make them realistic looking as they would have been seen in analog NTSC TV broadcasts (this film was made fifteen years before HDTV). Might not be evident on the DVD, but is quite evident on the Blu-ray as it undoubtedly was in its theatrical projection.

MPAA Rating Note:
This film was produced and submitted to the MPAA when there were only four ratings prior to the 1984 PG-13 implementation: G, PG, R and X (now NC-17). Its content didn't rate an "R" and therefore it was given a "PG." Today it would undoubtedly be given a PG-13 rating.
- November 22, 2019