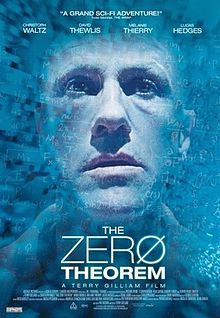 While not his best it's definitely among his much better films, with underlying themes similar to "Brazil" and "12 Monkeys," of which it's the third in a dystopian, Orwellian trilogy. It helps to understand what Zero Theorem is with some discussion about what it is not. There are many misconceptions about this film. Sadly too many of them come from film critics who should know better by now. Some will bash films if they're not high concept realistic narratives, or if they don't conveniently fit completely into an expected genre, or if they break from a director's past style. Finally there are those "haters" that will bash everything from a specific director.

Zero Theorem isn't a comedy, although it has some frequent comedic relief. Likewise, it's not a prima facie narrative reality story. It's surreal with symbolic metaphors and deeper themes. It's also not a high concept "popcorn" film for casual viewing while browsing the Internet on your laptop or texting your BFF on your cell phone. Paying attention captures details that reveal the underlying existential themes. It doesn't fit into the classic characteristics of a specific genre either. If it's not a comedy and it's not really Sci-Fi, then what is it? Most of Gilliam's films are a genre of their own. This one is no exception. Is it that important to have a genre in which it can be binned and cataloged? It's very easy to miss what this film is about if it's approached superficially or with preconceived notions about what it ought to be or is supposed to be. Terry Gilliam's body of films span a range of method, genre and style.

Qhoen Leth (Chrostoph Waltz) is a genius mathematician working on reducing mathematical "entities" to prove a mysterious "Zero Theorem." Socially isolated and reclusive, he anxiously awaits a phone call he knows will eventually be forthcoming to reveal to him the meaning of life and his existence. His angst regarding this with fear he may have missed taking the call gradually build to the very end of the film. Gilliam doesn't bog us down with any details about the Zero Theorem because we don't need them; to do so would only be a distraction from the underlying existential themes. The surreal environment is reminiscent of Gilliam's Brazil. The hazard is assuming it's Brazil reworked or restated, which it's not. Brazil's is depressingly drab and nearly monochromatic. Zero Theorem's is saturated in bold colors. Their similarity is in keeping both from being reality so we can see the underlying themes better. While they may be existential, they're different. Brazil is about pursuing happiness and fulfillment. Zero Theorem is about pursuing the meaning and purpose of one's existence.

The real power of The Zero Theorem is in its underlying themes and the metaphors used to convey them, with some comic relief to keep it from becoming too heavy philosophically. Without spoiling it with further details, look for the Grand Irony between what Qohen desperately seeks personally and the project's goal his thankless, unrewarding and mentally grinding job has him working to achieve. Every element of the story as it unfolds contributes to one, the other, or both of these as Qohen hurtles toward a personal collision of the two. Gilliam uses a surreal fantasy world to distance the audience from a plain narrative reality to better expose the underlying themes, and enhance or amplify them. Christoph Waltz gives a stellar performance; the supporting actors and actress are excellent. Production design is surreal with bold saturated colors in a highly detailed steampunk style.

Keep this in mind when viewing it and you'll understand Zero Theorem. The audience is ultimately left to draw its own conclusions about the two halves of the irony that dramatically collide at the end.
- November 22, 2019