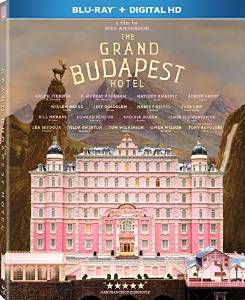 I scratch my head at times wondering why a movie is nominated for the Academy Best Picture award . . . or maybe not realizing there are socio-political reasons within the Academy beyond artistic merit . . . but I cheered when this one showed up as a nominee. While it didn't take home the Oscar (losing it to Birdman, another superb movie), it was nominated for all the right reasons. Often touted a comedy I found it to be mostly a drama with major comedic elements. The movie starts with a teenage girl entering a cemetery and placing a hotel key onto a grave monument decorated with hundreds of other hotel keys. The grave is that of an author, and the girl is holding his published memoirs about The Grand Budapest Hotel, which she begins reading after decorating his grave marker. The story about the hotel begins, as told through the author’s memoirs she is reading.

The four time periods:
The first provides a simple framework at the beginning and end within which the rest of the story is told. The movie proper periodically moves between the other three timelines. Unlike some non-linear films, the different time lines in this one are easy to follow with different characters in each, obviously different eras and the different aspect ratios. The hotel is a resort in the fictional Central European Republic of Zubrowka. When the author visits in 1968, it’s a run-down shell of its former glory with few guests. The author befriends the elderly owner, Zero Moustafa, and they agree to meet over dinner. Moustafa begins his tale of how he acquired ownership of the hotel and why he keeps it open. The tale then fades back in time from 1968 to 1932 when Moustafa was taken on as a lobby boy after his town was razed and his parents executed. Zubrowka is on the verge of war with a neighboring country, which has equally fictional symbols, flags and emblems, but all the trappings of being governed by a militaristic, fascist dictatorship.

The hotel’s concierge takes Moustafa under his wing, mentoring him. There is plenty of mystery, adventure and intrigue with a war looming, the mysterious death of the hotel owner and the machinations of the hotel owner’s cruel and evil son. The drama is generously peppered with wry comic relief throughout. Wes Anderson’s touch in the story and the directing is quite evident. Production design is lavish, with the hotel’s interior and exterior inspired by a combination of the Palace Bristol Hotel and Grandhotel Pupp in the Czech Republic, and the Grandhotel Gellért in Hungary.

A grandly executed production, with excellent pacing and unpredictability in the plot making for some suspense and numerous surprises. The non-linear author’s memoirs framework greatly enhances it. It’s a Wes Anderson triumph deserving five stars for a magnificent story told magnificently well.
- November 22, 2019